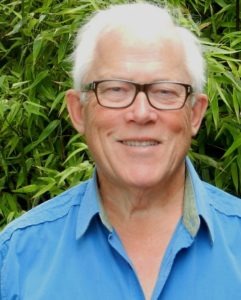 Who are the “great Canadian detectives” and where does Walsh fit into their ranks?

In my opinion no fictional Canadian character has emerged as the quintessential “Canadian detective” in the way that Inspector Morse did for the British, Kurt Wallander did for the Swedes, or Dave Robichaux, or Sheriff Walt Longmire—or in his day, Travis McGee – did for Americans. I won’t even mention Hercule Poirot.

The fictional Canadian detectives that I am aware of are all interesting people and have readers who follow them. It has always bugged me that none of them was a westerner.

I like William Deverell – he was a pioneer Canadian crime novelist — and I like Arthur Beauchamp but he isn’t my idea of a real westerner. He lives in the Gulf Islands and runs an organic farm for heaven’s sake.

Your man Walsh raises buffalo, which are as organic as you can get.

Why did you write And Justice For None?

Readers of Geronimo’s Cadillac said they liked Walsh, and obviously I like him too,  so I thought it would be interesting  to follow him into a darker and more dangerous part of the New Alberta where a corporation has been corrupted and the criminal justice system has broken down.

He’s a traditional kind of man who’s trying hard to get with the times. He has failings but if you get into trouble Walsh is the kind of guy you’d want in your corner.

Just out of curiosity, who is your favorite fictional detective?

That would be Arkady Renko, the depressed, honorable, indefatigable Russian policeman created by Martin Cruz Smith. [See Gorky Park, Stallion Gate, Havana Bay and The Girl From Venice]. If I could write half as well as Marty Smith I would die happy.

Both this book  and your previous novel, Geronimo’s Cadillac, concern Blackfoot first nations people. Why them?

I admire the Blackfoot people deeply. Their part in Canadian history hasn’t been sufficiently appreciated.  I dedicated the story to Rufus Goodstriker, the first elected Chief of the Kainai.

In 1948, when I was six years old, my dad took me to a boxing match at the old Edmonton Sales Pavilion. Rufus Goodstriker danced into the ring wearing a head-dress and accompanied by war-whoops and tom toms. He knocked his opponent out in the first round. How could you not be blown away by somebody like that?

Twenty years later he came to Edmonton as head of a Blackfoot delegation to see the Premier. I was privileged to spend an afternoon with him. For me he was the embodiment of Blackfoot pride, independence and elan. By any measure he was a mensch.

How do you think your story will be received by the Blackfoot people and Canadians in general?

I hope that all readers – regardless of ethnicity, gender or background — will see it as written from a place of respect.

You’re missing my point. What meant was that you’re a white male in your seventies. Are you concerned that some readers will view your Blackfoot characters as “cultural appropriation” of indigenous people?

I do not agree with people who think that only members of a particular group can really understand – and therefore have the right to write about – members of that group. Fiction is about empathy and imagination.  And respect for others, obviously.

You were trained in journalism, political science and history. Why did you start  writing crime novels?

I was drawn to the genre because it’s a great place to explore what human beings are capable of, in every sense. The protagonist in a good crime novel can be anyone as long as she or he is courageous, inventive and has grit. Think of the young autistic boy in The Curious Incident of the Dog In The Night-Time.

Walsh has his flaws but he also has what western old-timers used to call “sand.” Like Jake Gittes in Chinatown, Walsh is an ex-cop with a love/hate relationship with the Mounties. I think Walsh would like Raymond Chandler’s description of the private eye:

“Down these mean streets a man must go who is not himself mean, who is neither tarnished nor afraid…He must be a complete man and a common man and yet an unusual man. He must be, to use a rather weathered phrase, a man of honor—by instinct, by inevitability, without thought of it, and certainly without saying it. He must be the best man in his world and a good enough man for any world…If there were enough like him, the world would be a very safe place to live in, without becoming too dull to be worth living in.”

The many Westerners that I have known who were intelligent, independent, cussed and passionate about  “doing the right thing”.

Do they include actual members of the Mounted Police?

Of course. Several police officers, in various police forces, have been my close personal friends.

Copyright JohnJBarr.com 2023 - All Rights Reserved
Back To Top